Unexpectedly hard to get the timing right!? Recalling the debut performance of the “tombo” stunt

Suganuma: I was 23 years old when I participated in the Okoshi-Daiko (rousing drum) procession for the first time. I have been participating every year ever since. So, this is the 16th year. 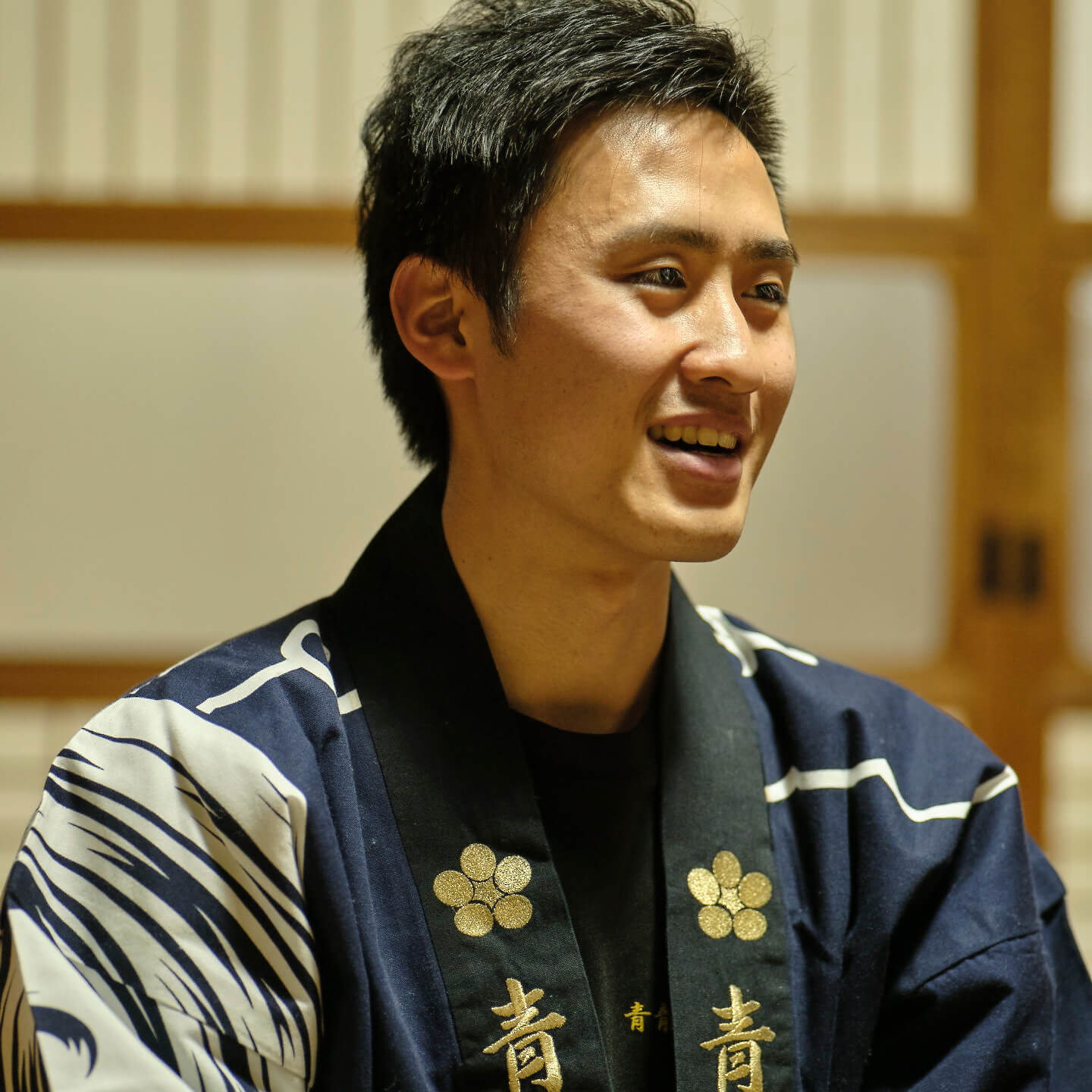 Numata: I was born and raised in Furukawa. I grew up thinking that I would participate in the otoko-matsuri (men’s festival), or the Okoshi-Daiko event, when I become a working member of society. I have been participating since I was 20, when I got a job as a firefighter. This is the fourth year.
Suganuma: Numata is 15 years younger than me but he is quite dependable. Before the Okoshi-Daiko event begins, we hit the streets carrying small drums called Tsuke-Daiko (attaching drums), each affixed on the tip of a long pole. We stop at certain spots in the town to perform a stunt called “tombo” (dragonfly), in which a brave young man climbs to the top of a Tsuke-Daiko pole. It is a physically demanding stunt. So, some performers save their energy until they reach a specific spot in mind, such as a square, the street in front of their house, or a place with many spectators. However, Numata can demonstrate excellent performance many times because he is young and has been doing a lot of workout.
Numata: Thank you. When I participated in the night festival for the first time as a grown man, I was given a chance to perform the tombo stunt in front of my house. I was able to show my performance to my father, grandfather, and grandmother, which is my fondest memory of the festival. I love the Furukawa Festival and I have been participating in it since my childhood. However, that was my first time to participate in the otoko-matsuri and there was a sense of accomplishment that I finally did it. I was filled with emotions. Being a young novice, I am somewhat hesitant to thrust myself forward, but Yohei gives a pat on my back and encourages me to do it. So, I climb with confidence. 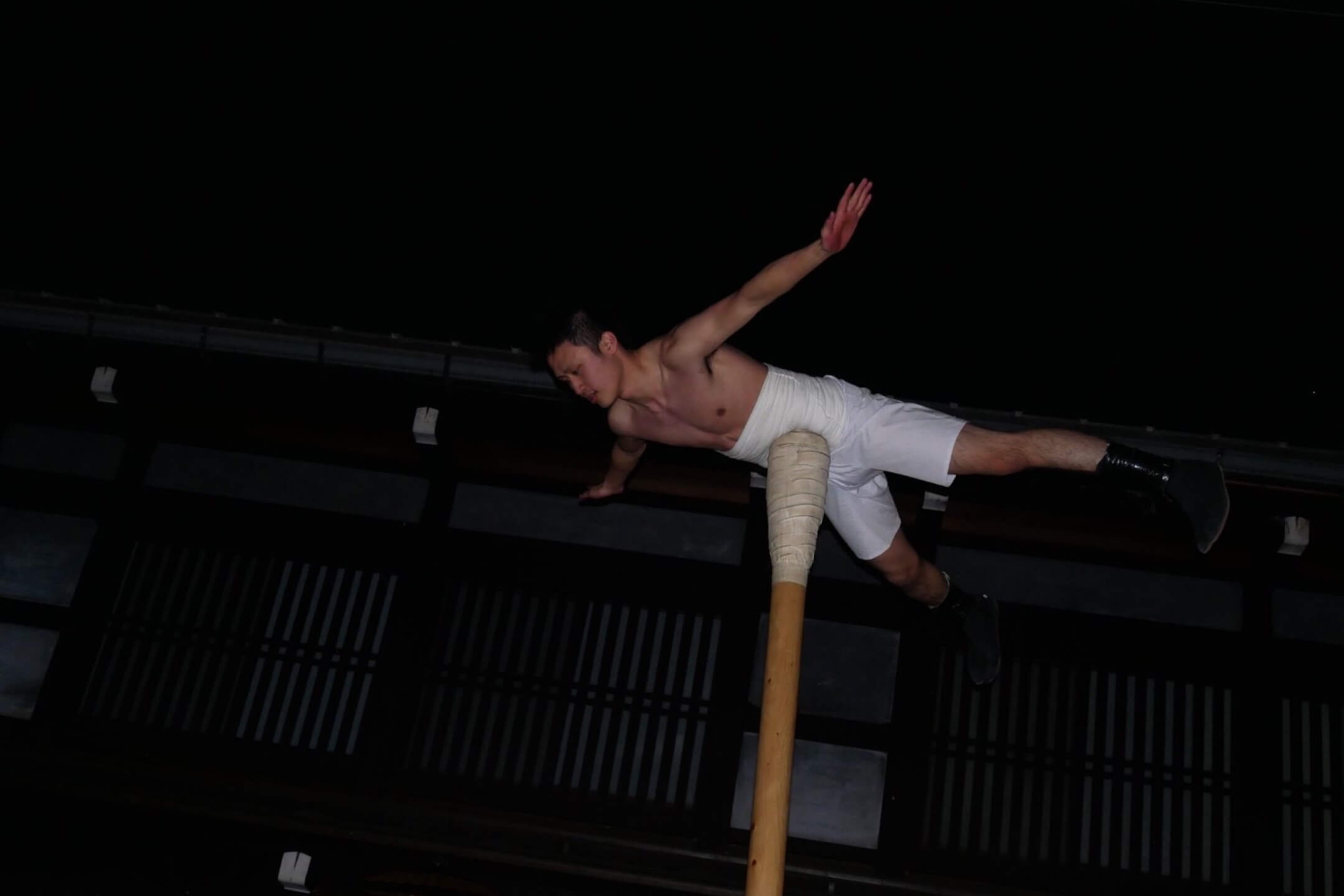 Suganuma: When I first participated, I got cold feet and was struggling to bring myself to do the stunt. Then, my brother, six years my senior, kicked me in the butt, saying, “Go for it.” So, I gathered my courage and did it. The sensation I felt when I made it is unforgettable. Therefore, I think everyone who wants to do it should go for it without hesitation. When young ones perform, people get excited.
Numata: As we are all a bit drunk, there are some who try but are unable to climb the pole. In such a case, someone pushes them up from underneath. But we have one or two fall off every year.
Suganuma: Since you’ve got human cushions underneath, you wouldn’t get seriously injured so long as you fall on them. But I’ve got to be careful because every year I make a New Year’s resolution to work out more, but only to realize that I’ve done nothing when the festival comes round.
Numata: My next goal is to ride atop the main drum.
Suganuma: I was 35 years old when I took that role. Once every four years when the turn comes around to our neighborhood to delegate someone to take up that role, senior members select the one based on the degree of contribution to the festival. It is extremely honorable to be selected to the role but there are some who are nominated but not selected many times. Since Numata has been working so hard, I would like to strongly recommend him so that he can win the role on the first time.

People who would have never been connected, were it not for the festival

Suganuma: I joined the marionette preservation association 10 years ago. It was something that I had been longing for since my school-boy days. While we, elementary school students, were practicing ohayashi (festival music) downstairs at a community center, adults would begin to assemble or practice karakuri ningyo upstairs. Children were not allowed even to step on the stairs. Indeed, there was an atmosphere that made me think of the field of the deity. As a child, I had thought that I would be allowed to operate them when I grow up, but it turned out that I wouldn’t unless I become a member of the association. So, I joined.
Numata: This is my third year of getting involved in the karakuri marionette performance. I have always been in love with the Furukawa Festival. I joined the marionette preservation association because I wanted to do whatever related to the festival.
Suganuma: When not in use, marionettes are disassembled for storage. We bring them over to the community center and reassemble them 10 days before the festival and start practicing the next day. Each marionette is operated by 10 puppeteers using strings and it is quite difficult to synchronize. 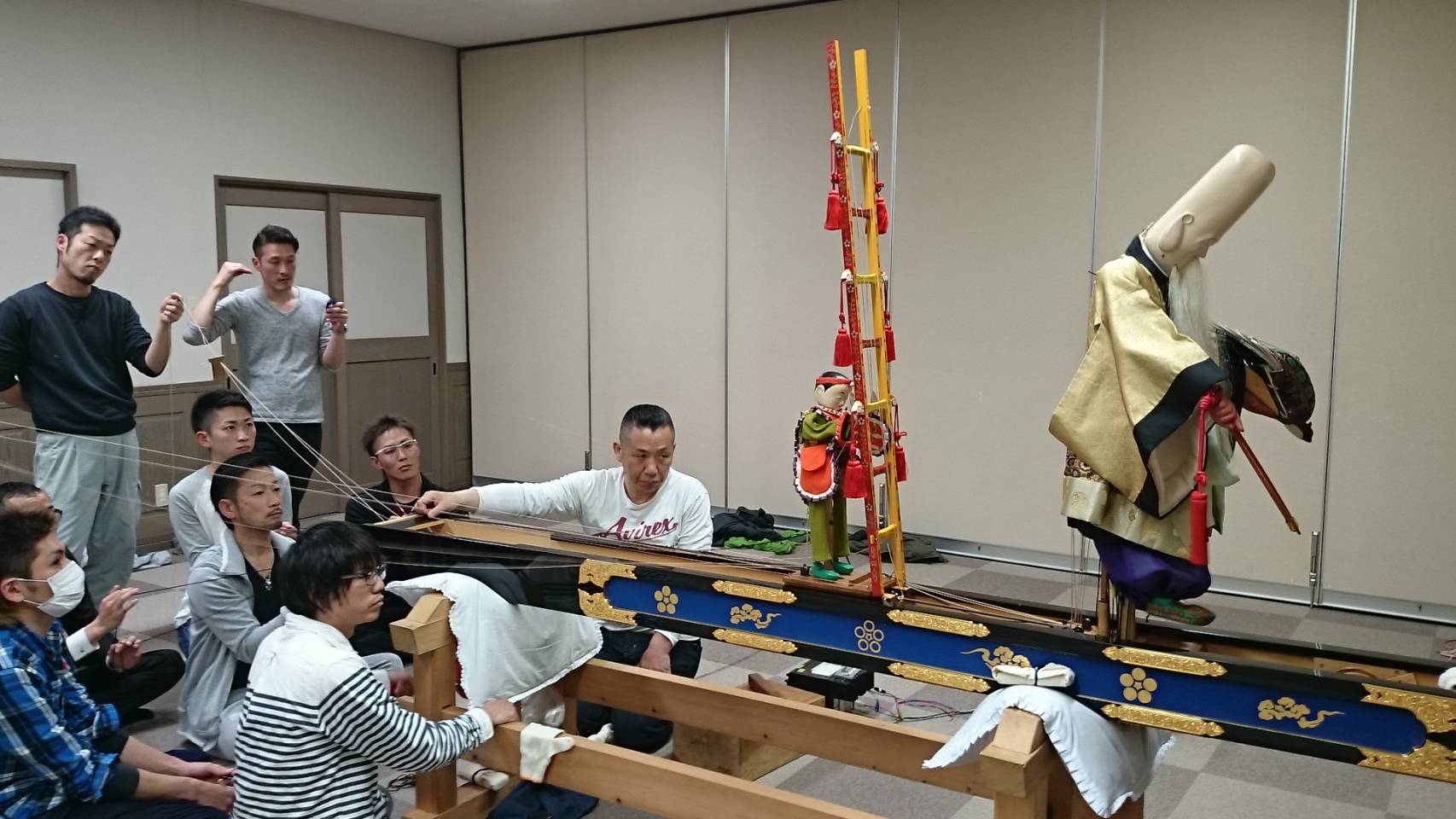 Numata: When even just one puppeteer fails to synch, it makes the movement of the marionette awkward. So, we all operate the strings with intense concentration. At the same time, giving the karakuri ningyo performance brings me a sense of accomplishment, not only because it is an offering to the deity, but also because many people see it.
Suganuma: All of the puppeteers are on the float but people on the street cannot see them. As a child, I couldn’t help wondering how the marionettes were being moved. I hope many people come and see with their eyes how marionettes move so naturally that they do not look like being operated by humans.
Numata: Apart from being a member of the same youth group as Suganuma-san, I have been helping children learn how to play the ohayashi music. In this time and age, I think it is quite important that various people in the town get together to hold an event once every year. Through the festival, you get to talk to people from different generations and make new friends. 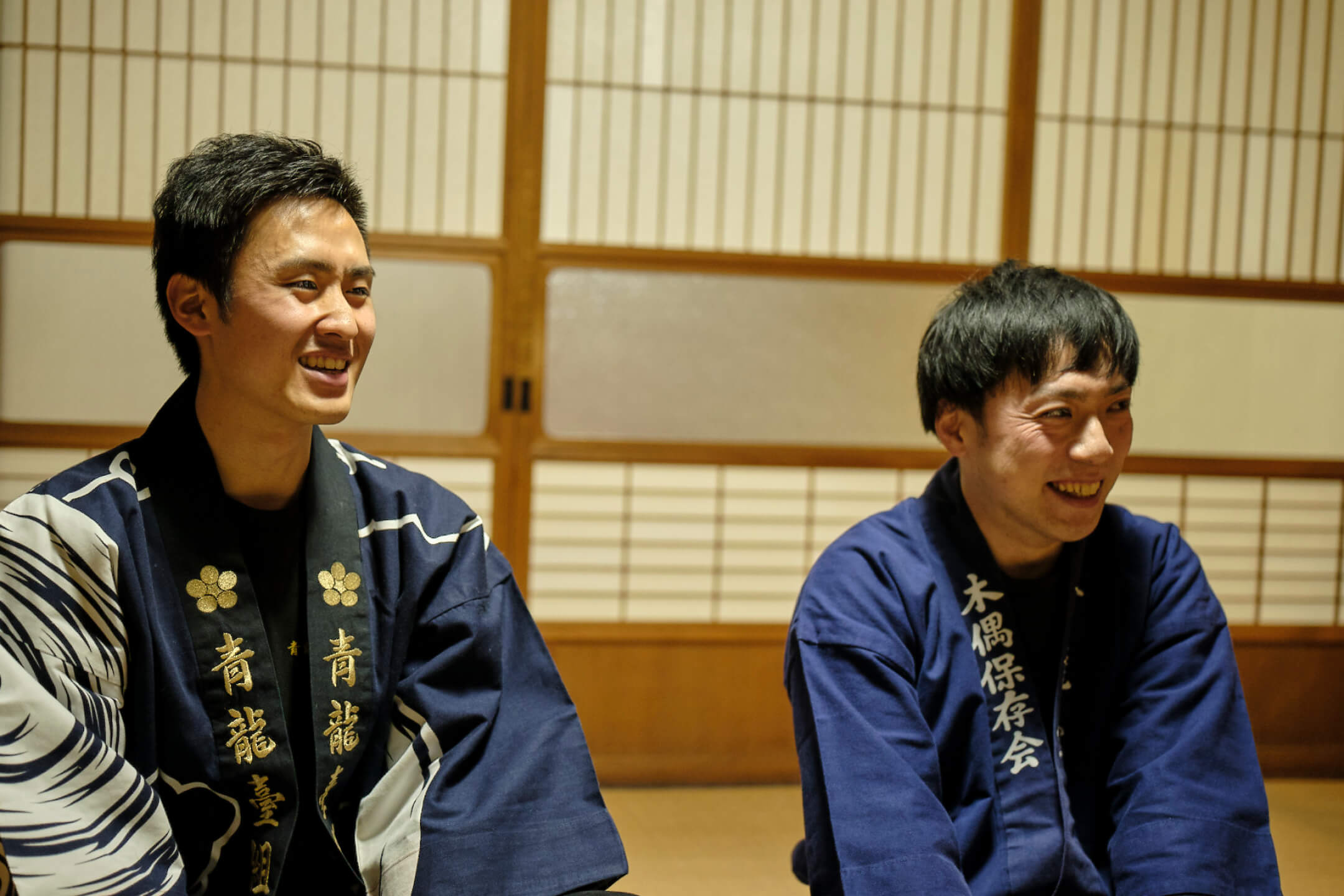 Suganuma: Indeed, there are quite a few who I have never chatted to despite living in the same neighborhood and all I know is that he or she is someone living around there. I wouldn’t have a chance to drink with Numata, had we not met for the festival. He is more than a dozen years younger than me, but I have never thought of him as being my junior. Rather, I consider him a team member to do something fun together. He is a polite and sensible man, but he goes wild and adventurous when the time is right. I’m quite envious.
Likewise, in the same way, the festival has been an opportunity to increase interactions with people senior to me. One of them is quite compassionate. He is the kind of person who would offer advice and put you in the right direction when you fail in something. But he looks a bit forbidding. As I am no big name in this town, it is very precious to me that I have got acquainted with people from various generations through participating in the festival.

(The latter half of the article will be posted in August.)