On April 1, 2019, Chief Cabinet Secretary Yoshihide Suga held up a framed calligraphy of the kanji characters for Reiwa, as he announced the name of the new imperial era. Osami Mozumi, who wrote the calligraphy, was born in the town of Furukawa. A Cabinet Office official until his retirement in March 2020, he has been pursuing his activities as a calligrapher under the pseudonym of Seison Mozumi. Although he is now a resident of Kanagawa Prefecture, he is full of love for his hometown and the Furukawa Festival.

Behind-the-scenes story about the creation of the Reiwa calligraphy

After graduating from university, I joined the national government, currently working at the Cabinet Office. The designated number of staff for our section is only two. I was appointed on the basis of specific skills and my task is to write documents with an ink brush. You didn’t know that there is such a job in this era where PCs are everywhere, did you? In fact, however, our section alone creates some 15,000 brush-written documents per year, such as People’s Honor Award certificates and letters of appointment for state ministers. For instance, in the case of a letter of appointment for the prime minister, we write the prescribed text with an ink brush on a sheet of paper bearing the Imperial crest of the chrysanthemum. The letter is then brought to the Emperor for his signature and seal before it is issued. 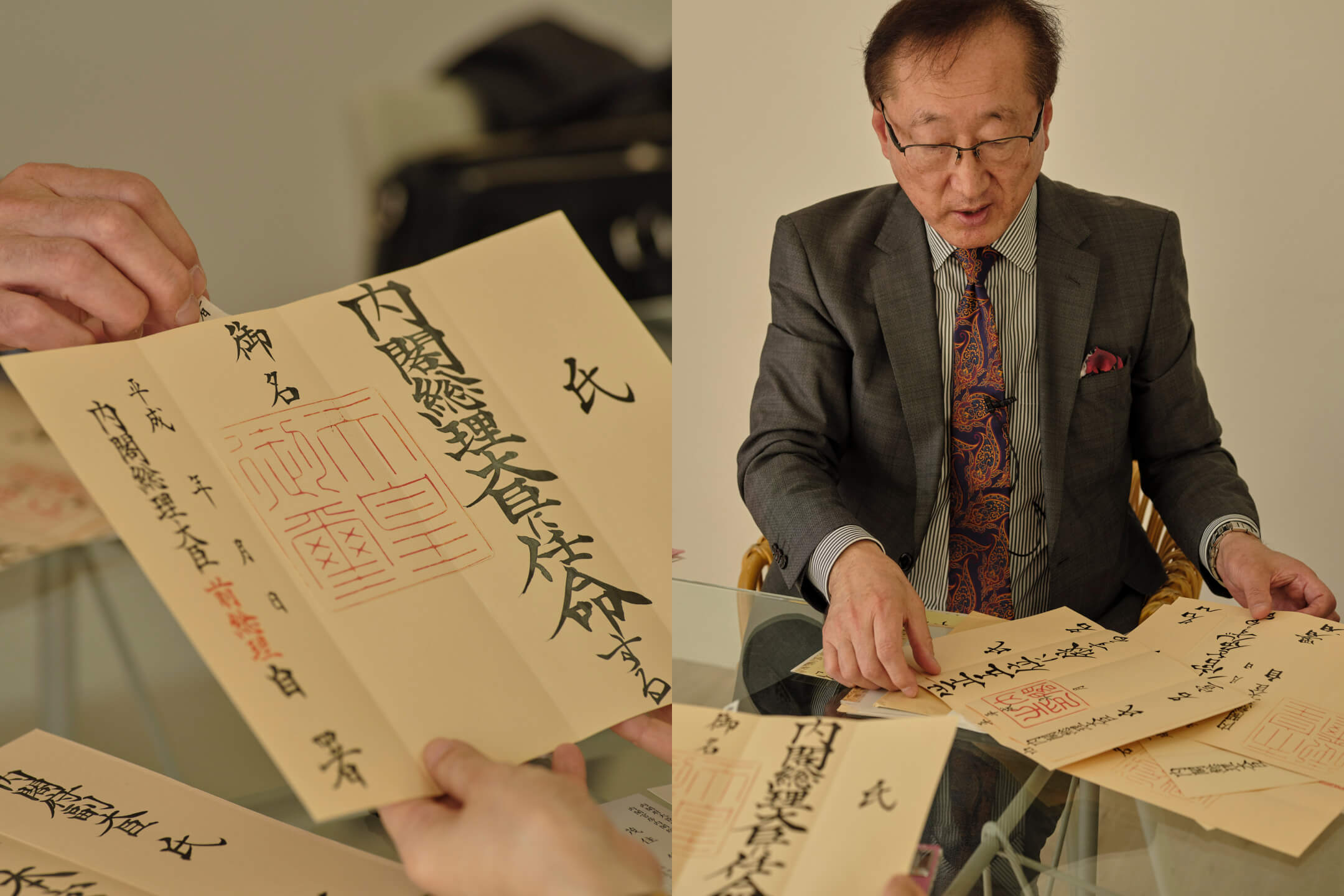 Documents we create in our section are not for showing our works of calligraphy. So, I bear in mind the readability and purpose of the document as appropriate for the occasion in which it will be presented to its intended recipient as I pick up my brush. 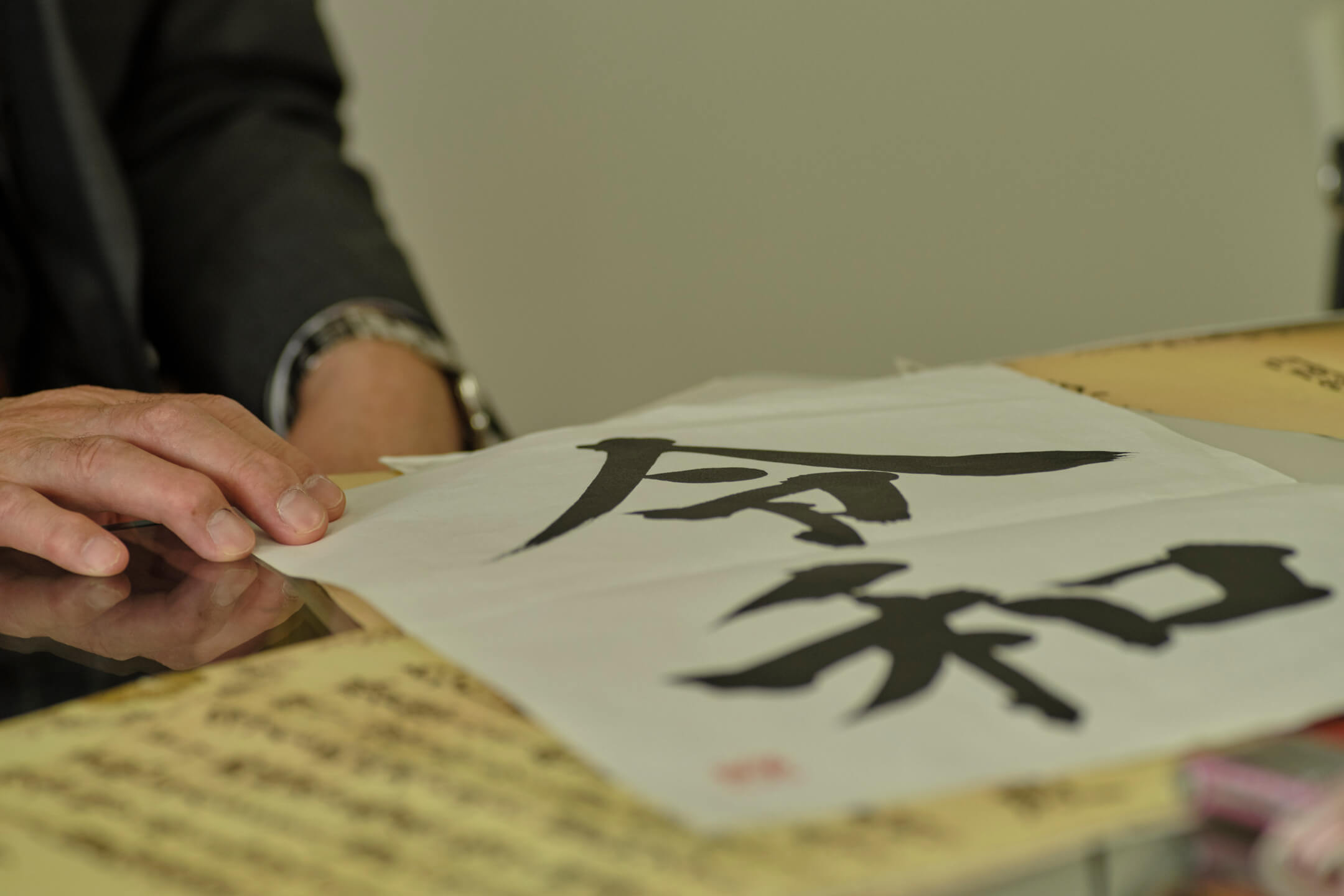 In the case of the Reiwa calligraphy, the purpose was to unveil the name of the new imperial era. It was presented in the form of a handwritten brush calligraphy, not in a printed form because it was thought that it should be done in the same way as in the previous change of era to Heisei. I wonder how many people would have readily embraced Reiwa as the name of their new era, had it been presented in printed form.

Extensive discussions were held to determine the name of new era and, naturally, the one that would be likely to be readily accepted by the Japanese people was selected. When the kanji characters for the new era name were shown, it readily penetrated into the hearts and minds of many people. I think that the force of the brush just gave a bit of push to this process, because calligraphy has a force and warmth. 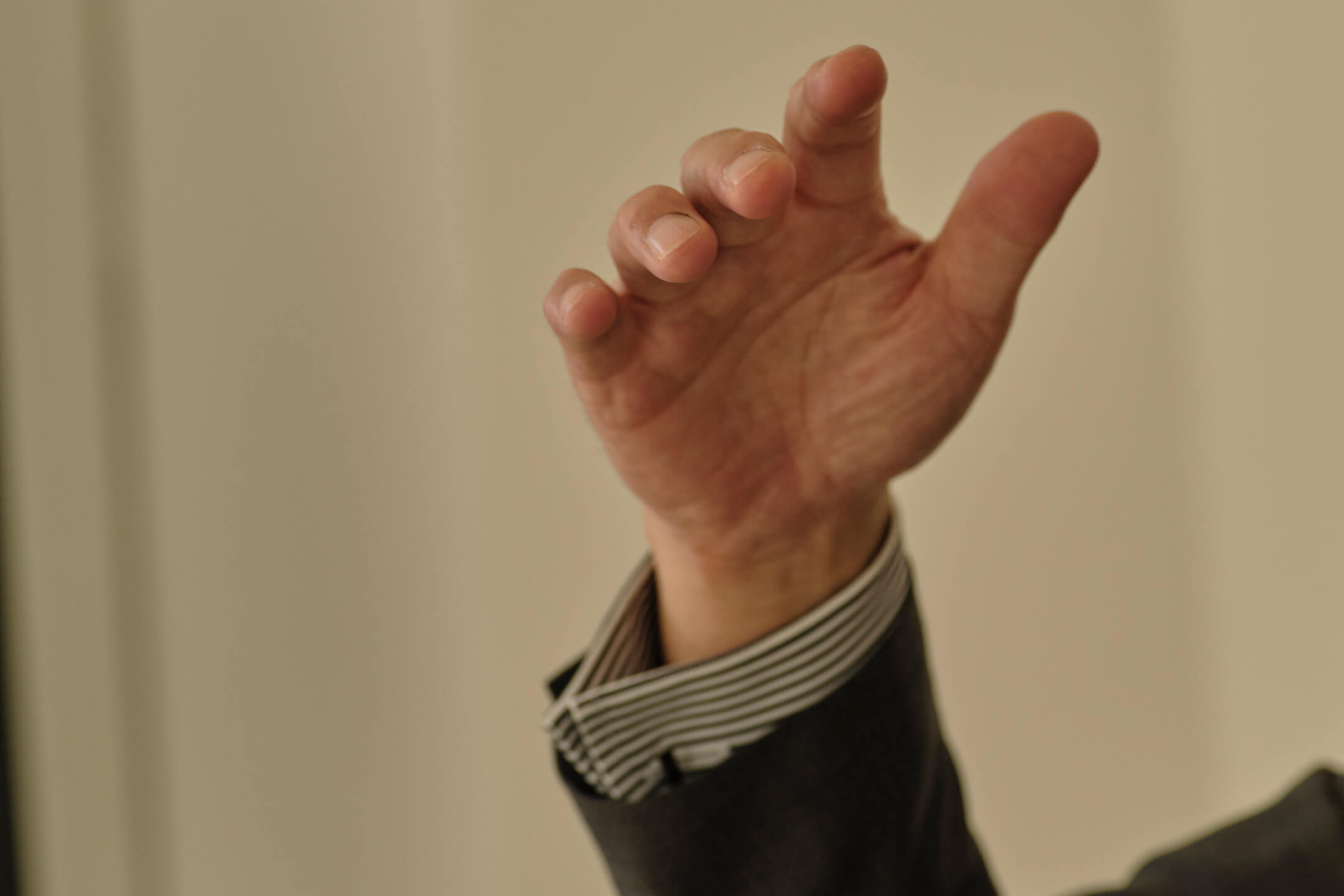 People often ask me whether I was nervous in making the calligraphy of Reiwa. To be honest, it is more nerve-wracking writing letters of appointment for ministers at the time of a Cabinet reshuffle because time constraints are more stringent. However, it would be a lie to say that I was not nervous. I spent five hours grinding sufficient amount of ink at home on the day before. On the day of announcement, I left home early to allow ample time for preparation. I did everything I could think of, such as writing trials to check how long ink takes to dry, before setting out to write the real stuff. After I was informed of the name of new era, Reiwa, I wrote it several times before writing the one submitted. As it turned out, I was able to complete the task well before the time limit.

Thinking rationally, it is just a two-letter word. It was not an artwork to which to apply my seal and I was just an aid behind the scenes. So, the task was not so demanding. However, I don’t remember whether I was standing or seated as I wrote it, even though I remember trying to find the most comfortable body position for writing and I can recall the shape of the letters I wrote. According to those who were with me then, I wrote in a half-crouching position with my shoes off. So, I think I was probably quite nervous.

When I met with Chief Cabinet Secretary Suga after the news conference, I asked him what he thought of the letters I wrote. His response was, “I’m sorry. I haven’t seen it yet.” So, the chief cabinet secretary was fully focused on his duty of receiving and unveiling the framed Reiwa calligraphy. I remember I felt somewhat relieved to hear that, realizing that I was not the only one who was nervous but managed to get the job done.

Works on exhibit in Furukawa

Works I did as a calligrapher, Seison Mozumi, are on exhibit.
I work in Tokyo, but I love my hometown. I cherish it because it is the place that raised me and made me what I am today. 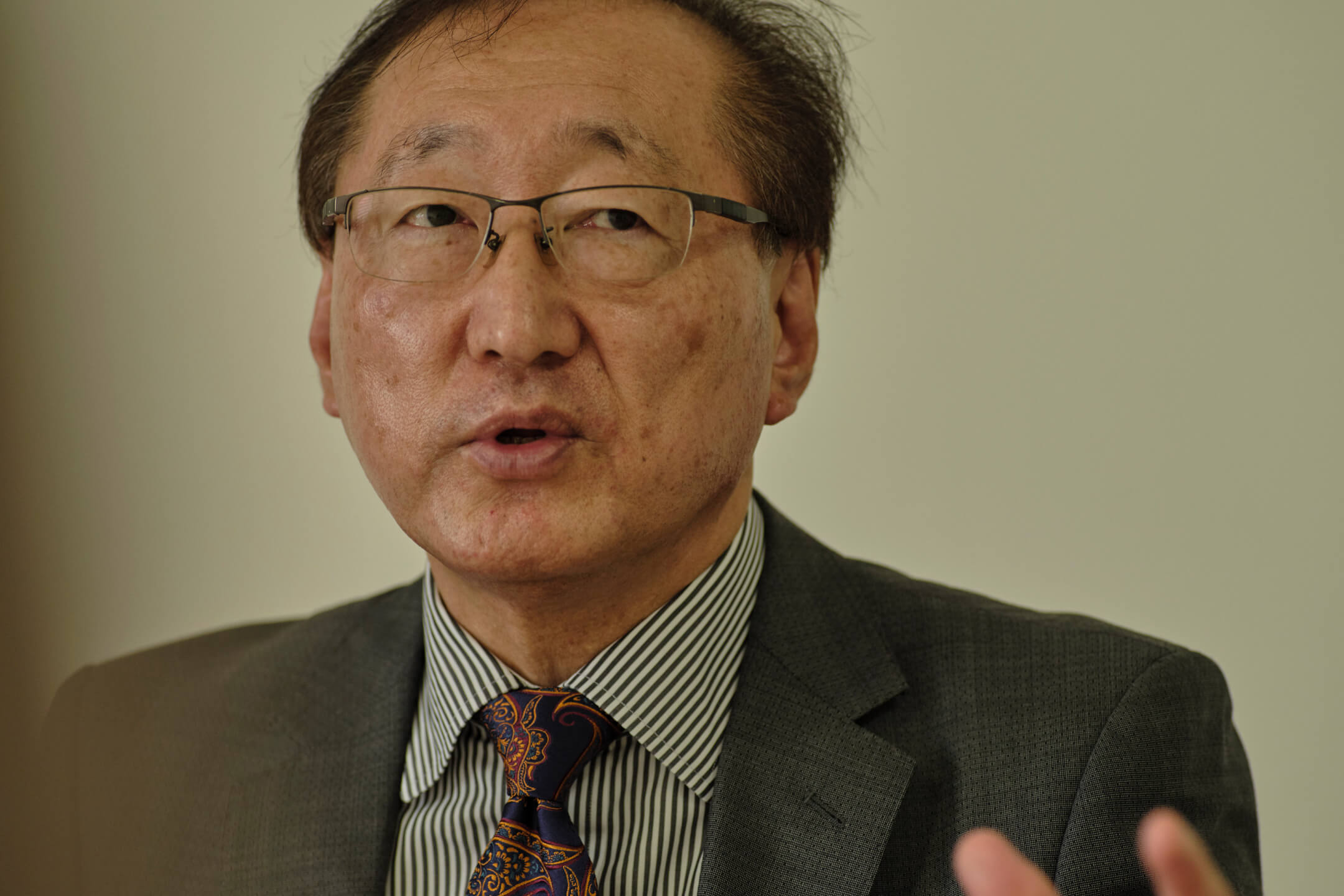 So, when I do large pieces of works for exhibition, I would donate them to my hometown whenever possible, which is something I have been doing since long ago. Of course, there are also some works I did at the request of someone I am indebted to. There are places in the town of Furukawa where you can see my works. The Hida municipal government has produced and made available a map showing all those places. 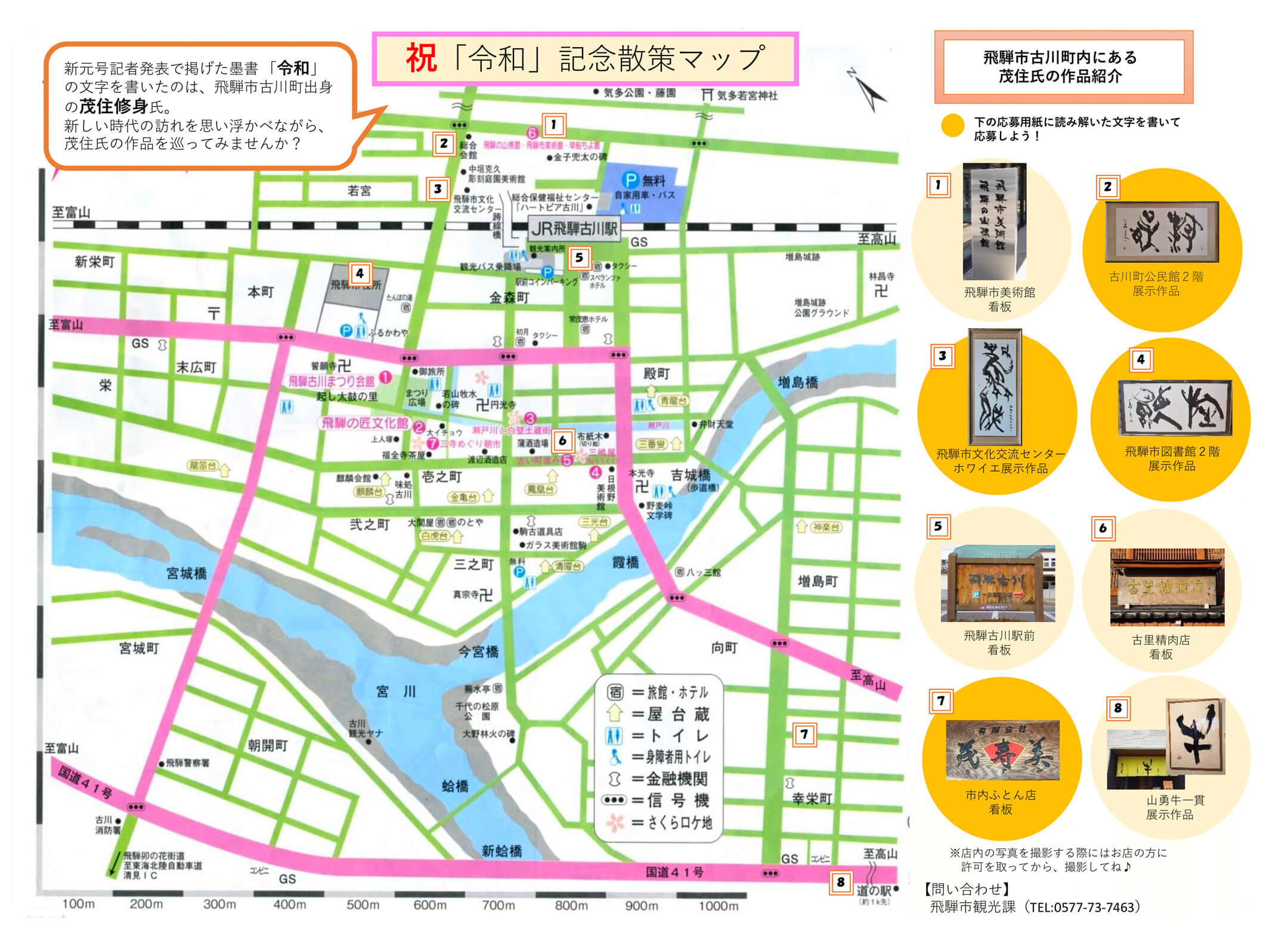 One example is Kaba Shuzo, a sake brewery. Every year, I do the calligraphy for the label of the brewery’s new sake for sale at the beginning of the year. Because of this connection, I was asked to write the founding family’s rules and motto. I have also donated my works to local inns, Yatsusankan and Busuitei.

Actually, the Hida Furukawa Festival Exhibition Hall has one of my works, which I did and donated at the request of the hall for the “Heisei Era’s Yatai” exhibition. It had been stored away for some time but was brought back on display in a frame following the renewal of the hall.

My works are my children. So, I am glad that it is made available for public viewing. I would like many people to see it, one that I worked on as a calligrapher, which is different from the way I wrote “Reiwa.”

Mushizushi (steamed vinegar rice with toppings) and grilled salted yellowtail are very special.
One of the most nostalgic foods from my childhood is Mushizushi. It is steamed, warm vinegar rice with toppings. It was a special family feast, which I looked forward to in winter. Another is kanburi (yellowtail harvested in winter) from Toyama Prefecture, typically eaten on New Year’s Eve. Yellowtail harvested in Himi, Toyama Prefecture, which is close to Hida, is highly appreciated and expensive. At the same time, however, yellowtail is considered good luck fish (because in Japan, it is called by different names as it grows, which is likened to getting promoted), and thus, it is customary in the Hida region to eat grilled salted yellowtail on New Year’s Eve. Yellowtail is cut into big thick slices rarely seen in Tokyo.

Furukawa is a snowy region and not so wealthy, but it is a culturally rich town.
People are willing to spend money on good stuff. Blessed with natural bounty as well as with good quality rice and sake, it has a rich food culture. These may be the reason why the town of Furukawa is often called the “little Kyoto.” 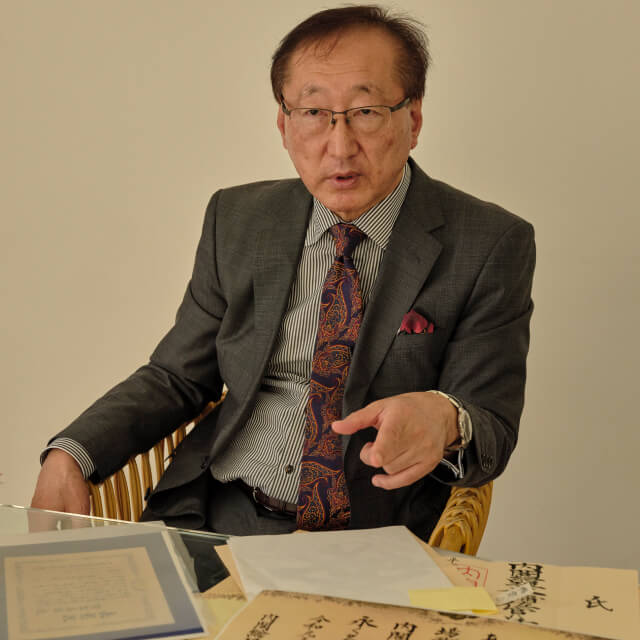 Profile
Name: Osami Mozumi / Calligrapher under the pseudonym of Seison Mozumi
Born in the town of Furukawa in Hida City. Discovering the fascination of calligraphy at Daito Bunka University, he apprenticed under San’u Aoyama, a recipient of the Order of Culture and member of the Japan Art Academy. After graduating from university, he joined the national government. As a special officer for orders of appointment at the Personnel Division in the Minister’s Secretariat of the Cabinet Office and the Cabinet Affairs Office of the Cabinet Secretariat, he wrote the calligraphy of Reiwa, the name of the new era, shown at the time of its announcement. Currently, he is serving as a visiting professor at Taisho University and a lecturer at Seitoku University’s Faculty of Literature and School of Correspondence Education.
https://mozumi-seison.com/